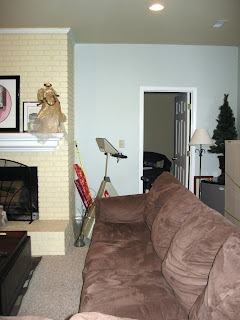 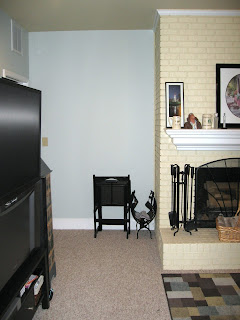 Here are photos showing wall space on both sides of the fireplace. One of these will be hubby's "I love me" wall. I'm taking his flight suit from his Navy pilot days and placing it in a display case/shadow box. I had planned on hanging it on the right wall, but the box may be too large for that space, plus the lovely light switch is there. Will make that decision later. On the other wall I'm planning on putting some photos from his Navy days, and some miscellaneous memorabilia.
I dug his flight suit out and took it to the dry cleaner. It really wasn't dirty, it's just that the thought of ironing a piece of clothing horrified me - so off to the cleaners it went. I should get it back over the weekend and can complete that part of the project and hide it until the big reveal.
We have a large poster size photo of Franklin D. Roosevelt addressing the troops during World War II, DDay the Normandy Invasion. Mike's father is in the photo (one of the paratroopers from 101st Airborne) - so it will be going on the fireplace above the mantle. Mike has wanted a place for this poster for many years; this will likely be his favorite part.
I have some clearing out and re-arranging on the mantle to do, as you can tell. Can't do it all at once as hubby will DEFINITELY wonder what's going on.
That exercise bike on the right needs to be thrown in the lake. I mean seriously, do I really want to use energy to ride a bike that doesn't go anywhere ?? It will NOT be in the "after" photo - guaranteed.
Posted by kelly at 2:18 PM

Can I make a Navy inspired hearth bed for Shasta? Pleeeeease?????

Sure, save your scraps and I'll do a kitty cave to match the man cave.

Susan you had better add a squirrel cave albeit a four-legged or flying variety they'll be sure to appreciate a couture nest to dive into! Shasta will love it!!