"The best birthday present anybody's ever gave me" 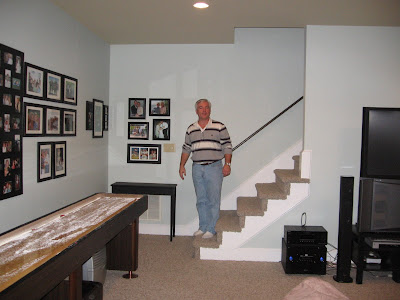 After a few hours of weather related airport delays, Mike and Aunt Helen finally walked in the door at 11:30 last night. After quick hellos, I pulled Aunt Helen aside and told her what I'd done. She wanted to be downstairs when Mike saw the mancave for the first time. I told Mike his birthday present came while he was gone and I might as well give it to him early since he'd find it today anyway.

Aunt Helen and I came downstairs, turned out the lights and told Mike to come down and turn on the lights when he got to the bottom of the stairs. Down he came, he was shocked, happy, elated, surprised, thrilled, all those things. He came to the center of the room and just started turning around in circles looking at everything. He was so happy, thought everything looked awesome and then spent an hour going from picture to picture recalling the memories behind each one. It was really fun to re-live our past.

The photo at the top of the page is Mike when he first turned on the lights. Today he said he'd help me take some really good pictures so I can post them. I even told him about the blog, so he grabbed my laptop and sat and read the entire chain of events. When we went upstairs for some much-needed sleep he told me "that's the best birthday present anybody's ever gave me!"

Funny story about "the envelope" that I will share later on when I have more time. I got to sleep for 8 hours last night, woo hoo - more sleep than I've had in 2 weeks! 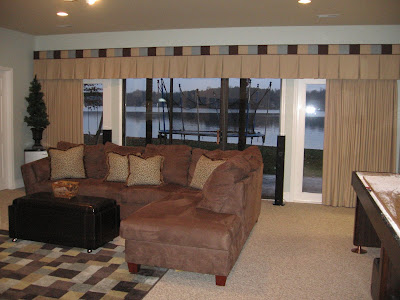 Twas 4 hours before the reveal,
and all through the house,
not a creature was stirring,
not even a mouse (might be because my cat got it today :o)
Photos and curtains were hung,
in the mancave with care ,
in hopes that my hubby,
will soon be there.
.......................so corny !! but remember I've had 3 hours of sleep.
Heres a sneak peak of the draperies and cornice/valance. I will post more photos soon, I have got to tidy up my house. The entire install took 5 1/2 hours, mostly because of the pictures.
I'll try to check in tomorrow with more photos.
Posted by kelly at 2:05 PM 4 comments:

Project Mancave - he's gone! all is a go!

Hooty-hoo, Mike got on the flight to Philadelphia! Yeah, I have renewed energy to finish tonight, or in the middle of the night. I'm staying up til I can't stand up.
Posted by kelly at 6:00 PM 4 comments:

Well, I THOUGHT hubby had jumped into the car to head north. Turns out, he got busy in his office tying up some loose ends and decided to call Aunt Helen to tell her what he was doing. She insisted that he not drive up there. Oh goodness, he may very well be back home tonight. He is heading to the airport to try to get on a flight to Philadelphia; if not he'll be home. He said he would try the first flight out to Philly in the morning and if he doesn't make it he'll go get her on Sunday.

I'm kind of in limbo now; not sure if I'll end up having to tell him or not. bummer. I'll keep you posted.
Posted by kelly at 2:36 PM No comments:

Today has been a whirlwind - attended my daughter's Christmas program at school, which was a wonderful way to sit down, calmly and enjoy the real reason for the season. Only a half-day of school today, so she's been my helper this afternoon.

After school we delivered a drapery job to a designer then headed to south Charlotte to pick up the 20 foot long drapery rod. OMG - it was hanging out my front window, threaded between the seats and out the back window of my Expedition - I think I might have been one of those people on the road who is supposed to have a red bandana attached to their dangling cargo ?? Oh well, we were able to keep up with the traffic on the freeway and arrived home without incident. Grace held the rod and was to let me know immediately if it moved forward OR backward while we were driving .

Chaotic is a good word to describe the last few hours - load of firewood shows up in the driveway and hubby calls and can't get out of town. He is going to New Jersey to fly back with his 91 year old aunt (tomorrow) who will be spending Christmas with us. Well...........those of you in the northeast today know why no flights are heading to NY from Charlotte for the remainder of today. Hubby is thinking about bailing and re-scheduling until Monday/Tuesday. Oh no, Mike, you can't do that...Aunt Helen will miss your birthday, she's probably already packed, cancelled mail, blah blah blah. In other words, I need him to get out of here so we can get this project installed tomorrow! Guess what? About a half an hour ago he jumped in his car and he is DRIVING to NJ, spending the night with his aunt and then they are either flying or driving back tomorrow. So, I "think" he is outta here for at least the next 24 hours.

My list is still very long. Yesterday I was able to finish pleating the panels and made 4 of the 7 pillows. (orignally planned for 6, but added an extra) I know, it's late in the game to be adding stuff, but I think I'll be happier in the end. I've cut my wood for the valance, need to build it, make 3 boxed pillows, and put tons of pictures into frames. I plan on staying up as late as I can without ruining my day tomorrow. My installer will be here between 9 and 10 in the morning.

Oh, the envelope - I did NOT open it, but not because I didn't try ;) The dofix only sealed it tighter instead of releasing the glue. DARN ! I've heard of people steaming open envelopes, yesterday was the first time I tried myself, didn't work for me.

Hope I finish. Oh, did I mention that I need to clean my house somehow during all of this?
Posted by kelly at 1:30 PM No comments:

Project Mancave - Uh-oh, hubby's onto me

Hubby thinks something is going on, so much so that the wiseguy tells me he thinks he knows what I'm getting him for Christmas. I insisted that he did NOT know, so he writes down on a piece of paper what he thinks it is, sealed it into an envelope with a "Kelly do not open before Christmas" on the envelope and put it away. Hah, rummaging for scotch tape in the desk drawer I found the envelope. Now, do I use my trusty dofix and steam it open and take a look at where his head is at? Or, do I just leave it. I really really really want to open it and re-seal it, possible enclosing a smarty pants note of my own. What do you think? Open it or don't open it? One more thing, whatever is written inside the envelope, he's already wrong because this project is for his birthday!

Yesterday I got the flight suit into the shadow box ready for hanging. I'm not 100% satisfied with it; I may have to make some changes after the reveal. The board inside it is covered with a nappy fabric that velcro is supposed to stick to. Problem is, the velcro doesn't hold that well. Hopefully it will hold long enough to make it through Saturday. It looks great, it would be a shame to have to re-do it.

My 2 hour photo adventure turned into a 4 hour adventure including a 2 hour date (and a big bill) with the Kodak Picture Maker Kiosk at the local WalMart - my LEAST favorite retailer in the world but yesterday they came through for me. Many of our photos are "pre-digital camera" age so I had to use the Kodak machine to make enlargements from prints. Even though I invested 2 extra hours than I had planned for, my pictures for the project are all here and ready to be put into frames. Yeah!

I finished up the Christmas cards and they should hit the post office today. Also got gifts wrapped and sent them on their way with hubby this morning to ship out of town.

Not much sewing time yesterday, I ended up coming down to the workroom last night and spent a half an hour tidying up the place. Sometimes you just gotta stop and clean up the mess before you make another one.

I had scheduled building the valance today, but I'm going to delay that until tomorrow afternoon. I want to get the panels pleated so they can hang for a day in the workroom prior to the install. They'll probably be a wrinkled mess after I finish dragging them around between the table and the machine. I also want to get the pillows started so hopefully I can make progress in those areas today.

It's the end of the day and it was a successful one! I accomplished more than I had planned, and that doesn't happen very often! I was able to get all the fabric squares (48 of them) cut and stitched together for the box pleat valance band and also made about 15 yards of chocolate brown welt. All of this went so smoothly and fast that I was able to table both panels. They are ready to be pleated and tacked - which may end up being a Friday late night project. 6 widths of fabric with black-out lining is heavy, but the tabling event wasn't as painful as I had expected. It took me bout 2 hours and 30 minutes per panel.

Tomorrow I'm going to work with photos for a couple of hours and try to get the flight suit into the shadow box. I'll be taking a break from the project for a few hours to tie up some loose ends for Christmas (ummm, cards and shipping gifts). From the looks of our mailbox the past couple of days we are the only ones who haven't sent out cards yet. I would also LOVE to get the boards for the valance cut, covered and joined, in preparation for finishing the valance on Thursday. I am unsure if I can handle the mounting of the valance myself; I wasn't able to carry all 4 pieces of lumber through the store. I wonder if that nice man at Lowe's would come by to help ??

I did manage to squeeze in the finale of The Biggest Loser tonight. I have pretty much watched the entire season and it was such a joy to see the results of all the hard work and determination of the contestants.

Another busy day tomorrow, but I feel renewed energy after all that I accomplished today!
Posted by kelly at 9:30 PM 2 comments: